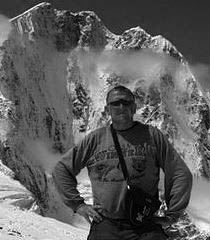 The personality of Raimondas Puišys is hard to represent shortly. He is a traveller, a member of Lithuanian union of the photographers, a member of Russian geography company. R. Puišys was born in 1963, in Jurbarkas, grew in Alytus, graduated from contemporary Lithuanian Agricultural university. The artist began to photograph during traveling. R. Puišys – a laureate of the contest “Nature – our home“, a prizewinner of Lithuanian and Russian photography contests, he has earnt awards for the photographs, exposed in the exhibitions in St. Petersburg and Tokyo. Photographer Raimondas Puišys has organized about 40 personal exhibitions in different themes in Lithuania and St. Petersburg. He has published artistic photography album “Highlands lowlands“ (2012).

Love for nature and people, the aim to save a memento of the vanishing memorials for the future motivate the photographer to fixate the natural change, human modes, his environment. In the photographs the author through the personal emotionally enriched relationship presents various aspects of our spiritual and social life, accents the importance of the cultural heritage. In the creative work of R. Puišys especially significant is the theme of the travels and expeditions to mountains.

In the photographs of cycle “Highlands lowlands“ the author concentrates at the element of nature, magnificence of the mountains and the immortalization of the harmony with nature. Also, the author fixates, as reportages, the daily routine of alpinists, travellers, efforts of spiritual endurance during climbing to mountains, permanent drama of the survival and the confrontation with dangers. Both these themes of the series of photographs supplements each other, in them an attention to the landscape of mountains emerges, that is often symbolical, also, to the people. The photographs of R. Puišys marks a desire to immortalize the greatness of the mountains and the fights of alpinists, giving a meaning of a necessity to reach the goal. Series “Highlands lowlands“ was published in 2012 by the same name as in the photo album of R. Puišys. The second part of this album concludes of the images of St. Petersburg. The author does not have the aim to fixate the places of the historical city, as documentary. His attention is focused on the cemetery of Lutherans, the immortalization of separate monuments. Also, he photographs a daily routine of the citizens, undressed, advertising unseen side of the city.