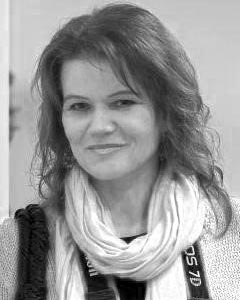 Kristina Valasevičienė has been photographing already ten years. She has contributed to the foundation of Kaunas Photo club, currently, she is the club‘s president. Since 2010 she began to participate in mutual Kaunas Photo clubs exhibitions, and in KTU-PHOTO study members exhibitions the artist began – in 2010. In 2012 in Kaunas technology university it was organized the first author exhibition “Kaunas forts. Visions“. Later, the exhibition was presented in Kaunas artists house, in Klaipėda public library Art section, in J. and M. Šlapeliai museum, in Vilnius, in country tourism farmstead “Šaltupis“, and couple photographs of the cycle were exhibited in 2014 in the international photographs exhibition “The world through the eyes of the woman“, in Israel. In 2014 December Kristina Valasevičienė became a finalist of Lithuanian photographers union contest “Debut“, among the winners several photographs from the cycle “Photocopiers“ were exhibited in the mutual exhibition, in Vilnius, in the photography gallery “Prospectus“, and they were included to the exhibition catalog.

In 2016 February-March it was organized a personal exhibition from the series “Photocopiers“ in the National Kaunas drama theater café. In 2016 June 25-August 7 she participated in Lithuanian photo art biennial “Photographic stories“, (tutors of the exhibition – artist Jūratė Sližytė and art critic Gabrielė Kuizinaitė) the exhibition was in the Historical Barons Munchausen family castle.

In the professional art site K. Valasevičienė presents the cycle of the uncolored photographs “Photocopiers“. Talking about this cycle of the photographs, the photographer tells: “Light and dark. Play of the opposites. Even when I was little, I liked to watch, how through the window shining light slinks on the floor, walls, surfaces of the things, by creating various patterns. Or brightly enlightened various objects it creates their doubles and like the existence of the parallel world. Without a light there isn‘t a shadow. Without the shadow we won‘t see, how bright is the light. One without the other unable, complementary each other two opposite poles. Together merging and creating various scripts, signs. They are everywhere, where is able to infiltrate even the slightest ray of the light – and on the magnificent buildings, and in the corner of the small room, and in the bright interiors, and in the glade of the forest. The scripts, that we can read as the book of the moment. Because the next moment will be already other signs, other scripts, other book. Just watch and read.“