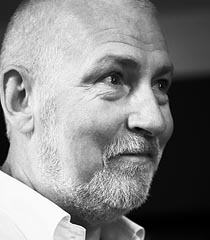 Arūnas Žilys was born in 1953 in Vilnius. In 1973 he graduated from National M. K. Čiurlionis arts school. In 1979 – graduated from Vilnius art academy. Since 1976 he has been participating in the exhibitions in Lithuania and abroad. Since 1985 – a member of Lithuanian artists union.

The paintings of A. Žilys and his created jewelry was used in the cinematic and TV films:
Anywhere But Here; Mod Squad, Office Space, Perfect Murder, She‘s All That, The Shrink Is In; True Crime; Arliss; Buffy The Vampire Slayer; Charmed; E. R; Friends; Jesse; LA Doctors; The Larry Sanders Show; Maggie Winter; Once & Again; Sport Night; Veronica‘s Closet; VIP; Wasteland; Work With Me; X-Files; Nurse Betty.
The pieces of A. Žilys have been get by National M. K. Čiurlionis museum in Kaunas, World Bank in Washington, the USA; private collections around the world.
In Lithuanian art painter Arūnas Žilys stands a bit away from the colleagues, represented traditional colouristic painting school, which main support points are emotional experience, expressionist manner, local colors range. A. Žilys walks the other way – in his creation work he openly declares and upholds refined aesthetical and decorative origin. His painting is marked the beauty of stagnant world. However, it looks only from the first sight. After the exploration closer, it begins to spread various notional and cultural layers, in which a rich language of the signs and their meanings is encoded. Repetitive motives of the past cultures are realized and revealed by the modernly thinking human. In the paintings of A. Žilys harmoniously get on a figurative origin, symbolic moods, modern stylistics sophistication and decorative shapes interpretation. All these signs are inherent to postmodernism stylistics, however, in the creation work of A. Žilys they are immuned from the agression, anger, ugliness aesthetics declaration, that is inherent to postmodernism. In the paintings of A. Žilys dominate theatrical elements – fantastic, unreal and sexless characters move as in the background of decorations. Their stylization, also, highlights specific, inherent to A. Žilys performative manner – small, fussy and frisky brush‘es touches to the canvas surface create ephemeral colors and space‘s vibration.
Art critic dr. Danutė Zovienė